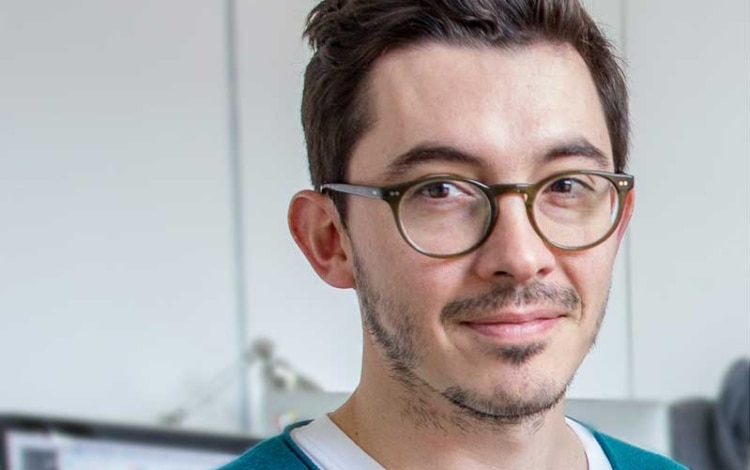 Thomas is the Co-founder and CEO of Cord Project Inc. Natie's Eitan and Thomas became fast friends after collaborating at the Google Creative Lab, NYC on a bunch of Google Search projects. Thomas has a délicieux accent and lives in Brooklyn with his wife Laetitia and their 2-year-old daughter June.

Now’s a great time to talk
BY Thomas Gayno

“If you’re lucky enough to have a parent or two alive on this planet, call them. Don’t text. Don’t email. Call them on the phone. Tell them you love them, and thank them, and listen to them for as long as they want to talk to you.” That speech was given a couple of weeks ago by the American actor J.K. Simmons, when receiving an Oscar for his fantastic performance in the movie Whiplash.

In probably the most politicized Oscars ceremony ever, J.K’s revendication was by far the simplest one. To certain people, it sounded a bit candid. “Why would people do that? That’s backwards. It took us years to get rid of the pressure to talk to each other.” “Texting is perfect.”, “Talking is so inefficient.”

J.K. Simmons hasn’t said we should all stop texting or emailing. He might think that, but that’s not what he said. His advice was to stop using digital text-based services to communicate our emotions to our loved ones. I strongly agree. And that’s why, I left my dream job at Google a year ago to build Cord, a free, incredibly simple, short iOS and Android voice messaging application. We’re a 6-person team, all based in New York, on a hare-brained mission: getting people to talk again.

It’s a fact, we’ve been speaking less and less to each other over the past two decades. When it comes to communicate, text (SMS or email) is now our modus operandi. And look at us now. We ended up using emoticons to say “I’m sorry”, abbreviations to thank someone, stickers in place of “I love you”. It’s true that typing on a phone is still a pretty cumbersome activity – especially on a touch screen – and we try to make it as brief as possible. But it’s not just that. Texting is by nature meant to be short and efficient. And as we are all consuming more information than a few years ago, this has become the real deal.

Yes, text is efficient. But life is not solely about efficiency. It is also – for us human beings – a lot about emotions. And with this: empathy, humor, nuance, subtlety, context. All these things that come for free with our voice. In case you want to go deeper here: Fast Co Design wrote an excellent article explaining why it’s so hard to detect emotions in email and texts and MIT Professor Sherry Turkle wrote a fascinating book called “Alone Together” describing the recent sociological changes in our modern societies.

Now, don’t get me wrong. I’m a technologist and I’m super excited about the future. Our phones are getting smarter and cheaper and faster every day. They are the most amazing communication machines ever made and we’re all incredibly lucky to live in these empowering times. But ironically, we’ve been talking less and less to each other. It seems that our phones got so smart, we forgot they were phones in the first place. Is that it? Is voice over? Well, no. And J.K. Simmons would be quite happy to know that now is actually a great time to talk. And here are a few reasons why.

According to CTIA, the volume of voice minutes started rising again since 2013. Likewise, texting (in volume of texts sent per year) started to decrease two years ago in the US and most European countries. Why? Some of us probably got too upset with recurring misunderstandings (they happen a lot through text and emails), others – especially after unplugging landlines at home and at work – just started missing hearing people’s voice… But a lot of this come from a new generation of messaging apps bringing amazing possibilities, for free.

Services like WhatsApp, Viber, Google Hangouts, GroupMe or iMessage have changed the way we communicate with each other. Suddenly, it is no longer about 160 characters and abbreviations. We can easily send photos, videos, drawings… We can send voice voice messages too, or start video chats. We can create groups and send these things to friends overseas without worrying about the cost. It uses the Internet, hence it’s free. Remember when you tried to send a MMS abroad and either couldn’t or ended up paying a stupid price for it? Once again, communication has become richer, cheaper and faster and that is awesome. But while being multi-media, all these mobile apps remain primarily text-focused.

In 2013, the venture capital firm Kleiner Perkins Caufield & Byers was one of the first one to claim it in its yearly Internet Trends report: “Audio is the next media to be shared on mobile” or “Voice comes back to phone”. And other experts joined them. “Voice is the next big thing in mobile” said Benedict Evans, Partner at the venture capital firm Andreessen Horowitz. Jenna Wortham from The New York Times said it outloud “The Phone Call is Back”.

Voice messaging apps such as Cord, Talko and Wire have all been launched within the past few months and are seeing great traction. Look at Podcasts now, they’ve never been cooler. “Serial” has become a global phenomenon and another one called “Start Up” – a podcast about a start-up making podcasts – raised $1.5M from renowned investors. “It’s back to the future!” tweeted serial entrepreneur David Sacks about the comeback of voice at the forefront of our communication habits. And there’s more! This trend also goes up to big companies like Google betting big money on its “Ok Google” voice command, Amazon with Echo, a recently launched voice-only computer or Apple which sees voice messaging as the next wave of digital communications. That last point is worth a few more details…

As we kept innovating and moving forward in computer engineering, we came up with a new generation of computers and connected devices that have no keyboards. Think of all the smart watches, headsets and glasses that will (one day) hit the market. And make no mistake, wearing a pair of strange looking glasses is weird, but everybody has been dreaming of the Star Trek communication badge or the Dick Tracy watch for the past decades. During his recent keynote, Apple’s CEO Tim Cook couldn’t hide his excitement showing how they made his childhood dream happen: placing phone calls from a watch. Well, wearing a connected pin, or a smart watch is no longer vintage sci-fi. Why would you stop at carrying 20,000 songs in your pocket when your cloud-powered headphones could carry all the songs in the world. We are finally building these devices. And guess what, none of them will have keyboard. There will be no typing involved. They’re all voice-centric. In a beautiful turn of events, working on the next generation of computers took us back to this weird old habit of using our voice.

From our first baby scream to our last words, voice is the most primal way to express ourselves. It carries more emotions, nuance and context than any smiley or punctuation trick. As our computers are doing more and more work for us, as their next generation is finally getting rid of keyboards, now is really a great time to look up and talk again.

I EHAV A GFIT
I was fortunate to grow up and be nurtured in a warm and loving home. But as a young child, at night, that nasty, green monster would sit on my shoulder, constantly...
Justine Zwerling
Read
The Only Like That Matters
A young couple attempting to get the perfect selfie at the Grand Canyon inch their way to the edge of the cliff before falling 800 feet to their death. A woman is...
Roger Baldacci
Read
The Best Detour You’ll Ever Make
Your ad career might not lead exactly where you think it will – and that’s the best news of all.  Chances are, you had a vision of when, where, and how your...
Stephen Curry
Read
Previous post
Back to all posts
Next post
×
What can we
do for you?

Looking to build a brand from A to Z? Need design or copywriting work, a website or some brand consulting? Please drop us a note with as many details as you can about your project and we'll get right back to you.